Pirate Kings is another great game in the Spin, Attack and Raid family. In this game you are a pirate and you have to conquer islands in stead of villages. Compared to the other games in this segment it had some nice distinctive features. For example, you have workers earning money on the islands you conquered. Also it has some unique mini games, like bombing your way into big rewards and completing photo puzzles. In this post I tell you how to play Pirate Kings and how to keep your spins high.

NB. Early 2021 Pirate Kings got a complete makeover. And not only the appearance of the game changed, also the gameplay changed significantly. Most visual is that the wheel of fortune changed into a slot machine. Also your pirate workers on the islands are gone. In stead of this you get free spins and coins every two hours with a maximum of 10 hours. But not all things changed. Of course the pirate stories and pirate adventures are still there. Check out the game to see if it changed for you for the best.

If you play this game the Pirate Kings Free Spins you get below are very useful! Make sure to visit this website regularly so you keep playing this amazing game. 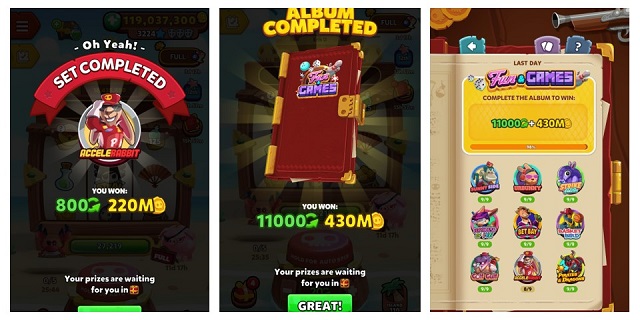 How to complete your Pirate Kings Album 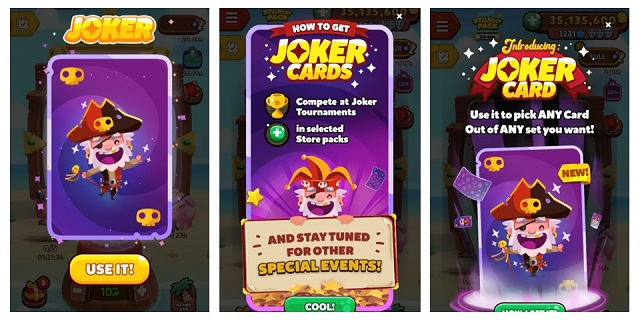 Joker Card in Pirate Kings – Get your missing card!

Erik August 12, 2021 No Comments
Pirate Kings has introduced a new feature: the joker card. People who play Coin Master are already familiar with this type of card, but if …
Read More

Erik February 3, 2021 1 Comment
Pirate Kings Free Spins links help you play when your daily free spins are gone. With these Pirate Kings Spins, you can get some extra …
Read More

My Pirates – Choose your own Avatar

Erik March 30, 2020 No Comments
In Pirate Kings you have a feature called My Pirates. My Pirates are the Avatars you can use in the game. In this post, I …
Read More

How much does an island in Pirate Kings cost

Erik March 16, 2020 No Comments
The objective of Pirate Kings is to build islands. Each Island costs more than the previous one. Unlike with Coin Master, I haven’t found a …
Read More

Pirate Quests – How to play and win rewards

Erik March 15, 2020 No Comments
Pirate Quests in Coin Master are mini-games within the big game. Don’t confuse these mini-games with events since they are really mini. But if you …
Read More

Erik March 12, 2020 2 Comments
Deep Sweep is a wheel of fortune showing only Spins rewards in Pirate Kings. For every spin on the wheel, you get the number of …
Read More

Don’t stack your cash – Spend it! This is why

Erik March 10, 2020 1 Comment
The best way to play Pirate Kings is to build items on your island right away and not to stack cash until you have enough …
Read More

When you first install Pirate Kings you learn how to play the game. First you choose a name. You spin the wheel and see the earnings coming. You attack an island and raid another. Also you find out how to build the items in your village. If you decide to connect to Facebook you are able to save your progress indifferent the device you use. Also you get some spins and coins to give you a head start. You can spin until your spins are gone. After that you have to wait for new spins to arrive. Every two hours you get free spins and coins. The further you progress in the game the more spins and coins you get for free. More spins you can stock by using Free Spins Links or by playing events. If you progress in this game you get more spins every two hours.

Once you hit the canon part in the wheel you get an attack on another pirate. Every time you have one chance to hit an item. If you hit it you get a big coin reward. If your attack is blocked your rewards are less. When you choose the pirate you want to attack there is an important feature. that is the revenge button. If you use that consequently you cannot attack your friends islands.

Stealing coins is like a raid in Coin Master or Pet Master. But instead of choosing within a village you have to choose an island out of three islands. One of the islands is the cash king and gives you the big rewards. The other two have a smaller reward. So, if you steal in Pirate Kings you always get a reward! the amount you steal in Pirate Kings is multiplied by the betting number you play on. A steal in this game gives you the highest reward.

Create your own pirate avatar

Also a nice feature in this game is that you can choose your own avatar. You can buy avatars for 10 million coins. You can collect 30 regular avatars and above some events have their own avatars. Having a certain avatar doesn’t give you an advantage. It is just for you to choose the pirate that suits you best.

One of the objectives in Pirate Kings is to conquer islands. You do this by building items on it. Every island consists of 5 items that need to be upgraded 5 times. So, you have to build 25 times to complete an island. Every item on the island has it’s own price and prices go up every island you build. After you completed an island you can move to the next island and you get a spin reward.

Next to just playing in Pirate Kings there are side events. One of the events that is always available is Pirate Adventures. In this side event you use the bombs you collect to complete missions. In this missions you destroy boats and houses to get rewards. Other events are like the Candy Collector Challenge. In this event you earn points by building items, stealing from other players and attacking other islands. If you earn a certain amount of points you get a reward. Also there is the Pirate Quest. This are small quests, mostly for some spins or stars.

Check out our YouTube channel with awesome video’s showing the Pirate Kings gameplay.

Next Level Rewardz is not the owner of either of these games, nor can we fix troubles and glitches in the game. For this you should reach out to the respective game owners. We just provide you with the best strategies to play and of course Free Spins.